History of the Battle of Brandywine


On September 11, 1777, American troops clashed with the British in the Battle of Brandywine in Pennsylvania, resulting in an American defeat that allowed the British to easily capture Philadelphia later that month.

In early September, with British General William Howe’s troops advancing toward Philadelphia, George Washington deployed his army along the east side of Brandywine Creek, about 25 miles from Philadelphia, and took up a defensive position to meet the British.
Washington was expecting the British to launch a frontal attack, and at first, that’s what appeared to be happening, as British troops congregated on the other side of the creek opposite Washington’s Center.
However, Washington received intelligence that a large force of the British army was heading north to cross the creek higher up and outflank the Americans. So Washington sent out orders to reposition his troops to meet the threat. But before the orders could be fully carried out, Washington received conflicting news that there were no British to the north, and he rescinded his orders.  Full Article 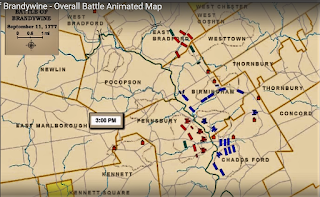 The Battle of Brandywine, also known as the Battle of Brandywine Creek, was fought between the American army of General George Washington and the British army of General Sir William Howe on September 11, 1777. The British Army defeated the American Army and forced them to withdraw toward the American capital of Philadelphia. The engagement occurred near Chadds Ford, Pennsylvania during Howe's campaign to take Philadelphia, part of the American Revolutionary War. More troops fought at Brandywine than any other battle of the American Revolution. It was also the longest single-day battle of the war, with continuous fighting for 11 hours.  Howe's army departed from Sandy Hook, New Jersey on July 23, 1777, and landed near Elkton, Maryland in the northern Chesapeake Bay. - Wikipedia
3rd Dog