"Some Building in Paris" The Rest of the Story 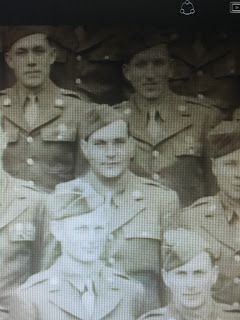 279th Co. C My father (Center)
"HISTORY: THE AMERICAN IS A PEACE-LOVING SOUL, and even worse than war he hates regimentation. But, though we of the 279th Engineer Combat Battalion are likely to forget much of that olive-green unpleasantness in peaceful years to come, we'll always remember with a note of nostalgia and fondness, individual incidents that tied us together, certain dynamic characters that were among us..." Wikipedia talk: Articles for creation/279th Combat Engineer Battalion 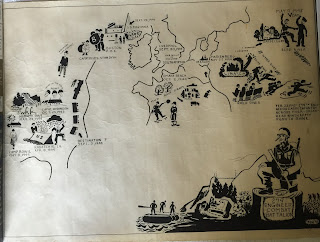 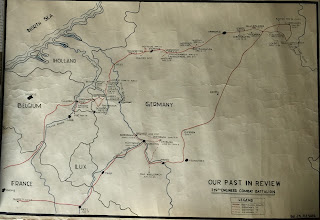 Our Past in Review by Sgt. J.N. Flesher

Sentimental Journey
Gonna take a sentimental journey
Gonna set my heart at ease
Gonna make a sentimental journey
To renew old memories
I got my bag, I got my reservation
Spent each dime I could afford
Like a child in wild anticipation
Long to hear that "All aboard."
Seven, that's the time we leave, at seven
I'll be waiting up for heaven
Counting every mile of railroad track
That moves me back
The 333 Engineer Special Service Regiment presents the dedication program of the General Alexander M. Patch Highway Bridge and the General George C. Marshall Railroad Bridge: Mainz, Germany, 18 January 1946. 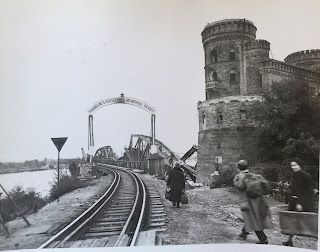 History of the 333rd: On March 1942, there was issued in Washington, D.C., a memorandum over the signature of Colonel Arlington, Chief of the Operations and Training Branch, Troops Division, Corps of Engineers, addressed to the Commanding Officers of engineer units to be formed for the militarization of overseas construction. This memorandum stated in effect that several engineer units were being built for the purpose of constructing and improving overseas installations such as docks and port facilities, railroads, roads, and a variety of barracks, utilities, ordnance shops, engine assembly plants, etc. Among the units to be formed were five Engineer Special Service Regiments, the 333rd was one of these. According to the memorandum, Special Service Regiments were new units designed to meet special conditions in the theaters in which they were to operate, with specialists qualified to operate the equipment to be taken over from former contractors.
The bulk of officers and men comprising the Regiment, perhaps 75% of whom were original members, were scheduled for return to the United States for discharge in October or November. It was therefore decided to reconstitute the regiment with lower point personnel selected from the remnants of the various combat battalions with which the regiment had been associated with the construction of redeployment camps. A mass transfer of staff was made during the three days, September 19, 20 and 21, when 1100 officers and men of the regiment were transferred into the 277th, 279th (my father's Battalion) and 1343rd Combat Battalions, each of which furnished replacements man for man. The 277th Battalion, the company for the company, generally manned the new first battalion of the 333rd Engineer SS Regiment. The 279th Combat Engineer Battalion manned the second battalion and the 1343rd manned Headquarters and Service Company. Some additional specialists were obtained from the engineer training center at Epernay, and the reorganization was complete by the 25th of September.

The new personnel of the Regiment was excellent, coming from combat engineer battalions with good war records, and maintaining the morale and spirit of their former units. A leaven of experienced construction men was present. The only adverse factor was a general desire on the part of all concerned to go home, as the bulk of the new officers and men were scheduled for redeployment within four months.

On September 26th the Regiment received the mission of returning to Germany to take over from the 343th Engineer General Service Regiment the construction of the crucial military bridge across the Rhine-River at Mainz. The original structure there, the famous Pousflehy bridge, constructed during the assault crossing by Group B Adsec of which the 333 was then a part, was reportedly in danger of impending floods and ice. This bridge, located immediately below the wreckage of the original structure, was also an obstacle to navigation and had a bad west approach. The early replacement and removal of this bridge, therefore, was vital to maintaining military communication between the main body of the American Army in Germany and their ports of embarkation and bases in France and Belgium, as the harbour of Bremerhaven was not yet in full operation. 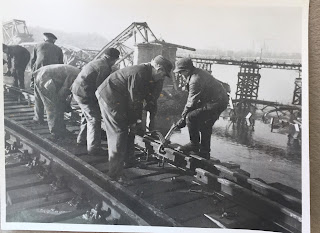 The original deadline of November 1st set for completion of this bridge in July when the project was conceived, was impossible to meet. The 343rd Engineer General Service Regiment, a veteran bridge-building organization, was decimated by redeployment, losing practically all of its Engineer personnel and officers, and replacements were generally unskilled. The advance party of the 333rd made contact with the 343rd on September 26, and billets were selected in and around Mainz at the closest location to the job possible. The newly reconstructed Regiment, complete in three trucks convoys, left Mourmelon on the morning of September 29th and arrived at Mainz on September 30th, stopping overnight at Metz. Company "A" of the first Battalion was billeted in bombed-out headquarters at Mainz. Companies "B" and "C" and regimental motor pool and heavy equipment shop were located at a bombed-out ordnance depot at Mainz-Kastel, these units being reasonable close to work. Battalion Headquarters, First Battalion, was located at Mainz within walking distance of the job. The First Battalion was commanded at this time by Major, later Lt Colonel, A.J. Bonar. The Second Battalion, commanded by Major, later Lt Colonel, E.H. Smith jr., had its companies located at a greater distance, originally in Gross-Gerau and Buettelborn, later in Bischofsheim and Gustavsburg. Regimental Headquarters was located in the technical high school in Gross-Gerau, a distance of 18 kilometers from the job. 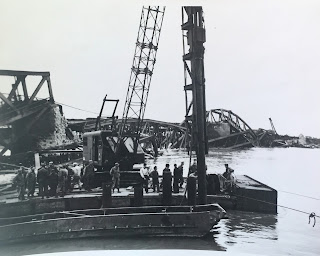 The work was taken over from the 343rd immediately, and steps were taken to acquire additional equipment from depots in France, Belgium, and Germany and from engineer organizations being inactivated. Much of this equipment was transported on trailers or floats for seven or eight hundred miles. By October 15th enough material had been collected to push the job, and it was not until early November before all of this had been assembled in working units. Second Lt, later First Lt, Hadfield with the assistance of M/Sgt William Witsman, did a stupendous job in rounding up supply and maintaining some 300 pieces of special engineer equipment, including at one time 15 floating 2-yard cranes. 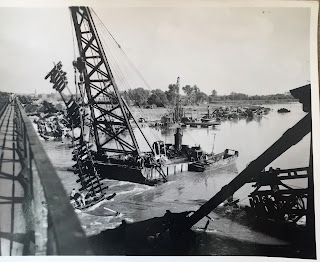 The First Battalion was assigned the construction of the Mainz side of the bridge, the Second Battalion, the Gustavsburg side. Company "B" acted as supply company for the First Battalion; Company "D" for the Second. Driving wood piles and concrete operations were started immediately on the Gustavsburg side where a long land approach facilitated early progress. The Second Battalion's mission also included the erection of the 54-meter R-type navigation truss - a ticklish engineering job because navigation through the narrow opening below, in the Roosevelt bridge, could not be interrupted. The First Battalion was assigned the construction of the Mainz side and had the bulk of the river work. Its initial progress, therefore, was somewhat behind that of the Second Battalion, due to the necessity of assembling much floating equipment. Work was put on a seven day week, three shift basis on critical operations such as welding, pile driving, concreting, etc. It was soon apparent that the bridge could not be completed until late November or early December, due principally to the rate of receipt of tubular steel piling which was being rolled by mills in the British Zone. Operations were favored by generally mild weather during the fall which permitted practically uninterrupted work. 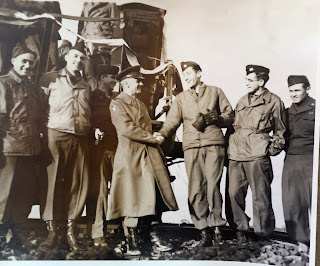 Following the holiday's plans were made for the ceremony that was to be held on January 19 for the dedication of the bridges. These ceremonies, which were most impressive, received world wide publicity, including radio, newsreel and paper accounts. The ceremony started with the dedication of the highway bridge which was named in honor of General Patch, former commander of the 7th Army. General Keyes cut the tape, assisted by Major Addison, M/Sgt Reiter, and M/Sgt E.P. Jones. Following the dedication of the highway bridge, a ceremony was held in Mainz at which M. Rene Schmitt, Mayor of Cherbourg, presented Lt Colonel Smith with the Regimental Colors on which the Cherbourg coat of arms had been embroidered. Following this, General McNarney drove the golden spike on the railway bridge which was named for General Marshall. General McNarney then drove the first train officially across the bridge to Gustavsburg where the party dismounted and had dinner at the Regimental Officers' Club. Many distinguished American and French officers attended as guests, and the ceremony was a memorable one.

November 11, 2015, in 3rd Dog Script blog post Mine Eyes Have Seen the Glory, I stated: "For the troops, supervisors (like my father), and the commander of this unified effort to build bridges was a dangerous affair... and a successful one!"

Finding 333 Engineer Regiment Special Service's story... and the story by Wikipedia Talk on 279th Combat Engineers confirmed my belief that the American is a peace-loving soul. My father demonstrated this sentiment by sending my mother the card below during a critical and dangerous time on his mission to build bridges and many years later when he allowed me to draw on his memories. 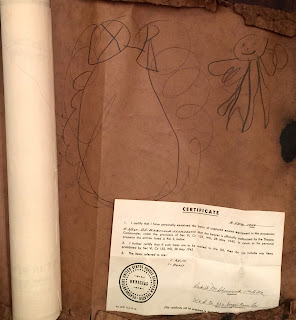 My secret map is an a-whole-nother story. 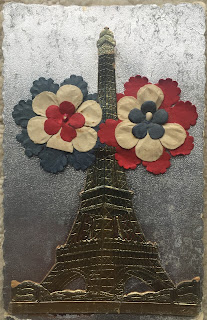 Love conquers all things; let us surrender to Love 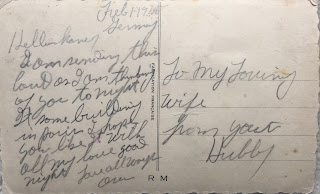 "Some Building in Paris"
...And now you know... The Rest of the Story.