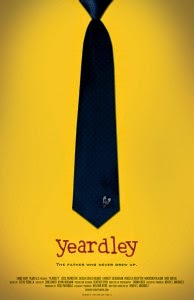 Are you excited when people get into you sexually?

Do you sometimes think the world revolves around you? You may be a narcissist. So when do we go beyond the line of healthy narcissism?

You’ll find a dramatic spiral that takes you over the line in Yeardley a cautionary tale of one man who struggles to maintain his family as he fights against his inner demons. The journey follows a path of temptation, sex, and destruction.

This provocative drama written and directed by Heath C. Michaels draws you deeper into Jeff Yeardley’s world of adultery and limited perception. The protagonist thoroughly demonstrates the narcissistic breakdown in communication and its consequences.

Charges of sexual harassment at work left Jeff Yeardley, (Jesse Bernstein) without a job and separated from his wife Susan (Saskia Grace Holmes) and son Chase (Garrett Geoghegan.) To complicate matters, Jeff falls victim to a ploy by two manipulative women (Rebecca Holopter and Madison Palasini) at a new job his friend helps him get.

The quality of Producer Paul Papadeas’ low budget…$15,000...film is amazing, and the actors were brilliant. I found this drama engaging and polished. You must see the film.