“When the power of love overcomes the love of power the world will know peace.”     - Jimi Hendrix

Although his mainstream career spanned only four years, he is widely regarded as one of the most influential electric guitarists in the history of modern music, and one of the most celebrated musicians of the 20th century.

The Rock and Roll Hall of Fame describes him as "arguably the greatest instrumentalist in the history of rock music."  The world's highest-paid performer, he headlined the Woodstock Festival in 1969 and the Isle of Wight Festival in 1970 before his accidental death from barbiturate-related asphyxia on September 18, 1970, at the age of 27.  - Wikipedia

...and in remembrance of Jimi Hendrix, today's post will examine these words: the power of love vs. the love of power.  And, the campaign slogan "Love Trumps Hate."

Let's go to the root meaning of the words, 'good vs. evil.' What better reference could we get on good vs. evil than the words of world famous exorcist, Father Gabriele Amorth (RIP)? Fr. Amorth performed over 70, 000 exorcisms over the past 30 years.  World Famous Exorcist Father Amorth Dies at 91

"Today there is much talk of love, but there truly is none!"

Speaking about politicians, "They followed the promptings of the devil and they have done so willingly," Father Amorth said in a 2006 interview.

Father Amorth said at the time only two spiritual realms exist, “the Holy Spirit and the demonic spirit,” and that the demonic enters in “because evil is disguised in various ways: political, religious, cultural.” The demonic spirit has one source of inspiration: “the devil”, and as a Christian, he said he fights “the beast spiritually.”

When asked if there were any leaders today who could be similarly possessed, the exorcist said there are “many who listen to the temptations of Satan and follow him.” Because of that, he said, “the world goes bad.” Instead of leading others “towards peace and well-being, the world moves towards war and unease.”


What our leaders say matters...

A special report by The American Spectator The Hillary Alinsky Lucifer Connection ...The Devil is in her details... sheds light on the meaning of her campaign slogan, "Love Trumps Hate."  Ben Carson, happy birthday Ben, understands what our leaders say matters.


In his speech at the Republican convention last week, Ben Carson made a statement that raised some eyebrows. ‘Now, one of the things that I have learned about Hillary Clinton is that one of her heroes, her mentors, was Saul Alinsky,’ said Carson.  ‘And her senior thesis was about Saul Alinsky. This was someone she greatly admired….’  So far so good. Nothing most political junkies haven’t heard before.  ‘And let me tell you something about Saul Alinsky,’ continued Carson. “He wrote a book called Rules for Radicals. It acknowledges Lucifer, the original radical who gained his own kingdom. Now think about that.’

...One of Alinsky’s most infamous rules is to isolate the target and, in effect, demonize it.  This was the thrust of Alinsky’s final and most egregious rule for radicals (no. 13): “Pick the target, freeze it, personalize it, and polarize it.” He advised cutting off the support network of the person and isolating the person from sympathy. He cruelly urged going after people rather than institutions because people hurt faster than institutions.

And so, on July 8, 1971, Clinton reached out to the aging Alinsky in a letter she marked “Personal” and sent via airmail adorned by two stamps with the face of Franklin Roosevelt. “Dear Saul,” she began warmly, on a first-name basis. “When is that new book coming out — or has it come and I somehow missed the fulfillment of Revelation?”

The new book of Revelation that Hillary was excited about was Rules for Radicals. Hillary told Alinsky that she had just had her “one-thousandth conversation about Reveille” (his other classic) and “needs some new material to throw at people.” She was hopeful that Rules for Radicals would be providing that material.

That said, Rules for Radicals is not a charitable book.  Any scripture references are deep-sixed by far more frequently used words like target, weapon, threat, pressure, tactic, revolution, rebellion, enemy, the devil, and most of all, attack, attack, and attack.

Hillary's campaign follows the tactics in Rules for Radicals; “Pick the target, freeze it, personalize it, and polarize it!”  As demonstrated in her slogan below, her message is based on Alinsky's nod to Lucifer. A close examination of her slogan will reveal it's not founded in love or truth. Rather, her clever message is based on ways to gain power through polarization of her target (Trump), freezing this message in a slogan, personalizing it (Trump is the hater) and hopefully learning her political kingdom, as Alinsky so admired Lucifer for doing in such a grand way. 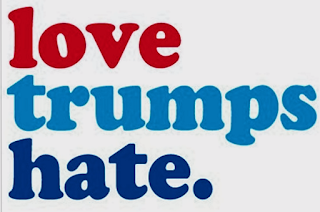 Alinsky was a lost man. He was confused about what a radical truly is. The truth is radical, and Lucifer is the Father of lies, not the Father of truth. Therefore, Lucifer cannot be the first radical known to man. What does radical mean?  It means to get to the “root” of things. The root of human existence is not based on our love of power; rather it is based on the power of love. Alinsky openly admits Lucifer is to be admired because he gained his own kingdom. This is a seriously flawed and perverted philosophy. It’s scary and sad to think a leader running for POTUS would adhere to these beliefs. If you can’t abide by truth in every situation in your life, you are not a radical. You aren’t ever going to get to the heart of the matter or the core of anything when your FOUNDATION is based on lies and gaining power at any cost. Hillary is constantly in the news for lying pathologically to gain higher positions. It’s interesting to note that Alinsky had many people to choose from throughout history, to include Jesus Christ, to nod to as an example of someone who allowed truth and love to reign supreme; yet he chose the Father of lies to base his works upon. This has nothing to do with your belief in Lucifer as a spiritual being or only as meaning (symbol) to humanity.  It has to do with what we all know Lucifer represents in human history and that this philosophy is based on a vice (power) alone.

Alinsky recommends his readers to rain hellfire on thy enemy.   That’s totally opposite of love. In the story of human history, Jesus was the true radical.  The division Jesus caused was because he spoke about the power of love – the power of love to overcome the enemy by loving your enemy - not raining hellfire on them.  Truth and love do cause great division in a loveless power hungry world.  Lucifer represents this type of division.  How could Alinsky have been such a confused man?

We have forgotten the love story because we have this sense that life is meaningless. This is what the secular society propagates in our culture.  Many use the word love in a cheesy manner.  People use the word love in their slogans, or as a strategy to gain power, without a true understanding of where the word love originates or the attachment it has to our one true Creator. The good news is God’s love for us.  God wills everyone to be saved and to come to the knowledge of the truth. Each unique individual has value.  Jesus said the truth will set you free. The freedom to understand that our lives do have meaning and purpose. We are deeply loved, and we are made for love.  That’s why love stories are so moving, and movies always have some element of a love story.  It is in God ultimately that that deepest longing for love is satisfied. Creation is the power of Love.  Let's not use the word love in such a polarizing and careless manner; after all, it is another word for God.

“When the power of love overcomes the love of power the world will know peace.”