Why Black and Blue Lives Matter 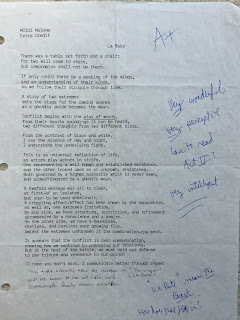 There was a table set forth and a chair;

For two will come to share,
But compromise shall not be there.

If only could there be a meeting of the minds,

And an understanding of their kinds,
As we follow their struggle through time.

A story of two extremes
Sets the stage for the coming scenes
As a ghostly guide becomes the mean.

The conflict begins with the play of words,
From their hearts soundings, it can be heard,
Two different thoughts from two different birds.

From the contrast of black and white,
I see the essence of day and night,
I understand the underlying fight.

This is a universal reflection of life,
As actors play actors in strife.

One representing a well known and established existence,
And the other looked upon as an unknown, resistance.

Both governed by a higher authority which is never seen,
And aided/hindered by a ghostly mean.

A twofold message was all too clear,
At first... of an isolated,
But soon to be used the wheelchair.

A crippling effect had been shown by the separation,
As well as... one extremes limitation.
On one side, we have structure, restriction, and refinement
Accompanied by conscience and desire.
On the other side, we have a boundless,
Restless and careless ever-growing fire.
Amidst the extremes unforeseen is the combination- the mean.

It appears that the conflict is over communication,
Showing how we continue to undermine our relations.
But in the heat of the battle, we must hold our defense
And pay tribute and reverence to our prince.

When I returned from Desert Storm with disabilities that hindered me from pursuing a career as a police officer, I had no other choice but to go to school.  I took part-time work at the Department of Veterans Affairs as I started school on Vocational Rehabilitation as a veteran.

During my studies in the early 1990's, I took a course in theater.  The course gave me an opportunity to spend time at Actors Theatre of Louisville, and as extra credit for the course, I wrote the above poem to describe one of the plays we performed.  It was set in 17th century France.  I made up my own French word La Bete to mean the wager, and discovered the real meaning was more appropriate; the beast.  My note states, “The title literally asks the question will we learn to see all sides and communicate freely among ourselves.”  God, the ghostly means communicates with us through boundaries, language, and numbers and our stories are the way we communicate with each other.  I realized today, I’ve demonstrated in my own personal journey the very words of Cicero.  Especially, the last lines, “For once we learn that we are equipped by nature for acquiring wisdom, and we sense that the mind, as sort of image of the gods, is worthy of care and cultivation.”  Thus, confirming in my mind, we all have the ability to join the two extremes and find peace in the land. This is why black and blue lives matter.
"let these truths be self-evident..."
...Cicero strove to reyoke the sundered pair.
Poetry and law (law took in a broad sense, as the Greek nomos, to include custom and tradition) appear to immortalize the transient or even to bring non-being into being by touching our minds and memories through words.  If philosophy, which strives uncompromisingly to unveil the true nature of things, is the antithesis of poetry, it would likewise seem to be the enemy of the traditions and beliefs on which law depends and which in some measure law is.  The beginning of Cicero's laws unobtrusively questions whether law contains any truth whatever. Law, like poetry, maybe nothing more than fiction that furnishes pleasure by establishing trust in eternally binding precepts and practices.  Cicero forestalls this positivist inference by drawing a distinction between two senses of the word law.  The popular sense, according to which law is "that which sanctions in writing whatever it wishes, either by commanding or prohibiting," and the more learned sense, derived from nature itself, according to which law is
"the mind and reason of the prudent man."
...Law is natural in the same way that reason is natural, as a gift of nature bestowed on every human being.  But only in the prudent man, whose reason is developed as far as it can be, does reason become "correct," and so only his commands and prohibitions are true "law."  ...Even if complete knowledge of good is unavailable, as Cicero's skepticism implies, we may infer that an approximation to wisdom is accessible through the assiduous exercise of understanding. Cicero's final peroration to Book I paints a picture of perfect wisdom that can be a standard, even if unattained, of human striving.  Self-knowledge is the key.  For once we learn that we are equipped by nature for acquiring wisdom, and we sense that the mind, as a sort of image of the gods, is worthy of care and cultivation.