Corruption is legal in America

American Politics: Does the Government Represent the People? 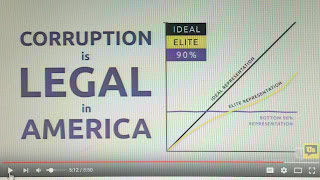 In American politics, the number of American voters for or against any idea has no impact on the likelihood that Congress will make it law. That's the flatline on the above picture representing the bottom 90% of income earners in America.  Economic elites, business interests, and people who can afford a lobbyist, they get their own line. Notice how much closer their (yellow) line is the ideal.

James Comey FBI Director speech on Clinton Emails, No Charges for Clinton - That's right, corruption is legal in America.  People are espousing the words progress and change while the behavior that follows these words is more of the same ole same ole; protecting the establishment.

Nassim Taleb explains why we are flatlining in economics...

The illusion of Control Fallacy

"Anything that is fragile will eventually crash, and the system is fragile... it is crashing... we are in the middle of a crash."  The "government" (or the elite controlling Congress) is not attempting to make a smooth transition because they created the problem or "rigged the system" for their benefit. 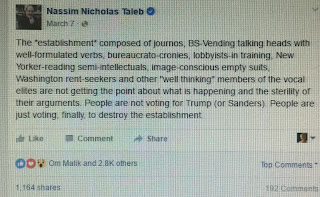 "People are not voting for Trump (or Sanders).  People are just voting, finally to destroy the establishment." - Nassim Nicholas Taleb

Let's see what we can do to make our vote count!

Why the Federal Reserve System is unconstitutional

What's more, our security is at stake!

Why does this matter?

It is now necessary to call this group out and replace the near worthless Federal Reserve Notes with Treasury Dollars.  These Treasury Dollars are going to be replaced by currency minted out of the gold in the US monetary reserves from the Global Debt Facility."

"My correspondence on this matter with the Development Committee (the Joint Ministerial Committee of the Boards of Governors of the Bank and the Fund on the Transfer of Real Resources to Developing Countries) and with the Governors and Adjutants General of the 50 states has been posted on the internet and hard copies were mailed to the respective members of the Development Committee c/o their embassies in Washington as well as to the Governors of the 50 states and their Adjutants General."

"Prime Minister David Cameron, who stonewalled the requests of 3 MP's concerning the UK's monetary gold reserves that are administered by the Board of Governors on the World Bank and IMF, https://s3.amazonaws.com/khudes/international+gold+reserves.pdf  has been reprimanded by the UK citizenry as well as the responsible individuals who fulfilled their mandates by accurately counting the Brexit ballots."

"All truths are easy to understand once they are discovered; the point is to discover them." -Galileo

Antifragile
Americans are not fragile and need to understand what antifragile (being alive) means.  Nassim offers a blueprint for how to live and thrive...

American Politics - "we don't want to focus politics on the notion that it involves the rejection of principles around which a large majority of our fellow citizens organize their lives."  "If you are fragile you are disproportionately more harmed by a significant event than a small event." This video explains why moving away from the Globalist agenda (Network of Global Corporate Control) back to our organic constitution and using local currencies will create the least amount of risk and the greatest amount of growth.


"The United States is in interregnum because the US Congress has refused to convene the convention that is mandated under Article V of the US Constitution of 1789. The monetary gold reserves of the United States are safe and are administered on behalf of the people of the United States by the Board of Governors of the World Bank and IMF. These monetary gold reserves are going to be used to mint constitutional Dollars to replace the unconstitutional Federal Reserve Notes. Villages and towns are also going to be issuing local currencies. During this interregnum, I vote the shares of the United States on the Board of Governors and on the Boards of Executive Directors of the World Bank and IMF. The Global Debt Facility was created as an act of love, and it is administered as an act of love. There is amnesty to prevent the agents of the Network of Global Corporate Control from going to jail and from physical harm so that they can now do their duty under the US Constitution of 1789 and preserve humanity." - Karen Hudes

Are you a flatline?  Are you fragile?  No... Make corruption illegal in America!