One of the many bits of "secret" information that history buffs love to pass around is the rumor that the Seal of the President of the United States undergoes a surreptitious change in wartime, with the regular seal being swapped for slightly a different version in which the eagle's head is turned to face the talon clutching a group of arrows (rather than facing the talon holding an olive branch, the symbol of peace) as a subtle visual reminder that the nation is at war. This rumor has been made familiar to modern audiences in recent years through its mention in the political television drama The West Wing, as well as its inclusion in author Dan Brown's 2002 political thriller Deception Point:  - Snopes A Turn of the Head

Another view by The American Heraldry Society Left and Right - War and Peace  Since, the West Wing mentions Hebrew, let's take as look some old thoughts on the West Wing. 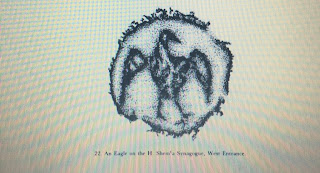 22.An Eagle on the H. Shem'a Synagogue, West Entrance
Page 333 Ancient Jewish Art and Archaeology in the Land of Israel

There's something about the West Wing...